Towards the beginning of 2021, Ethereum’s network became particularly clogged as the popularity of decentralized finance saw more and more people attracted to the field. This is when the Binance Smart Chain really took off and even surpassed Ethereum’s daily transactions by a considerable magnitude.

This had a lot of teams focus on building on BSC as it was more efficient, effective, and quicker. Of course, some argued that there are drawbacks to that, especially in terms of centralization, but the fact of the matter is that BSC emerged as a viable alternative and saw an influx of projects.

Robust Protocol operates on the Binance Smart Chain as means of reducing transaction fees while also improving speed and scalability.

What is Robust Token (RBT)?

Identifying an issue with most tokens being inflationary, the team behind Robust Protocol introduces a hyper-deflationary token with a limited and fixed supply on BSC.

The total supply of RBT is 100,000 – minted at launch. No more RBT can ever be created. Going even further, though, every transaction with RBT will incur a 1% fee. This fee will be automatically deducted from every single transaction. It will then be burned and converted into Robust Reward – RBW.

What this does, essentially, is contribute to the permanent reduction of the total supply of the RBT token.

Now, it’s also worth noting that not all of the 100K tokens were pushed into circulation on day one. 50% of it, or 50K tokens, were transferred to the RBT Reserve under a 15-day time-locked contract.

This reserve is the single source that can inject more RBT in circulation and it’s obviously capped at 50K RBT. The main idea behind it is to inject more RBT into circulation in the event of a drastic reduction in the total supply which can happen in times of extreme price movements and rapid burning. Of course, the injection can happen after a community vote of RBT holders. 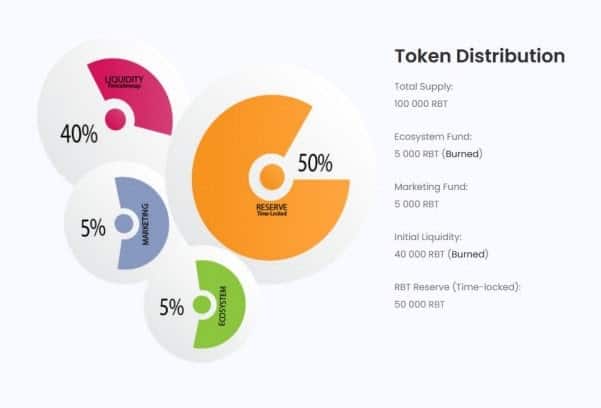 What is the Robust Reward?

First things first, the robust reward (RBW) can only be created by the RBT smart contract. In essence, whenever there’s a transaction, there’s a 1% fee that’s deducted and converted to RBW, as mentioned above.

RBW represents the holder’s share in the Robust Protocol ecosystem. It will be used for the governance of the entire ecosystem and to confer voting rights to its holders.

In addition, RBW will also be the primary token for bootstrapping any future projects that are under the Robust Protocol umbrella.

In light of what we previously discussed about injecting tokens from the RBT Reserve, RBW holders are able to vote to unlock all or a fraction of the 15-day time-locked 50K RBT.

Naturally, the RBW one owns, the more RBT they stand to receive from such a distribution, as the unlock will be distributed to all RBW holders proportionally.

Besides the unique tokenomics of the native cryptocurrency of the protocol itself, the roadmap promises a lot of things. The features include an algorithmic stablecoin, borrowing and lending capabilities, and extensive analytics within the exchange in the RBT Ecosystem.

Once all of this is delivered and deployed, it will be the perfect point for the platform to expand and further develop in the future.

This Bitcoin Metric Is in “Pain,” Which Hints at Potential Reversal

Can This Bitcoin Ratio Have Hints For A Bottom?

GO AND WATCH/READ THE NEWS ON THE FRONTPAGE.

Read it a few times, until you understand how it works 😃👍

The floor for Marine clothing trait is 3 sales away from 69eth.

🔥Offering a 10eth fire sale for the next 24hours