In the course of one of his regular chats with the XRP community on Twitter, current Ripple chief technology officer David Schwartz has told the story of how he withdrew and cashed out almost all of his BTC as the world’s flagship currency has been printing new highs since 2010.

Ripple CTO has 2 percent of his BTC stash left

The current Ripple CTO has tweeted that he has been taking profits from his Bitcoin holdings since BTC first rose to the $100 level and then continued to spike, hitting new all-time highs of $250 and $750, and now finally reaching $63,000 per coin.

Talking with an XRP fan who goes under the Twitter name MackAttackXRP, Schwartz shared that he had used a similar strategy of withdrawing part of his profits made from Bitcoin’s rise.

By now, the Ripple CTO tweeted, he has only around two percent of his initial Bitcoin stash left. Apparently, he also sold some of his BTC back in 2017, when Bitcoin hit a $20,000 all-time high. 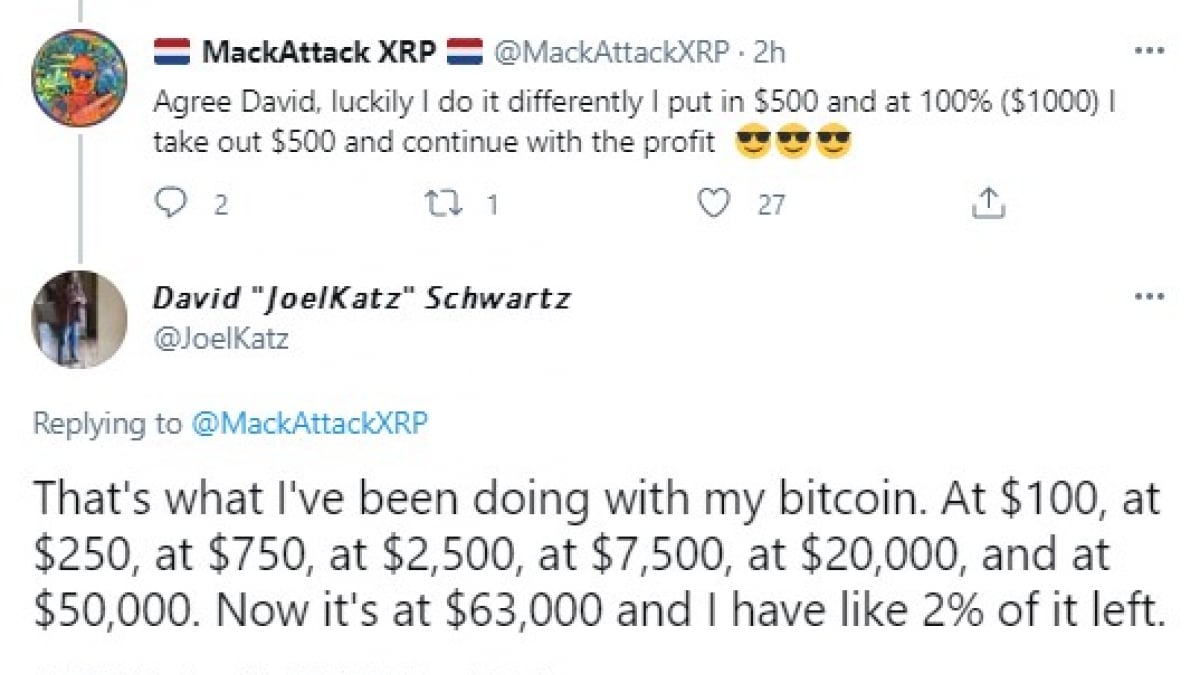 As U.Today reported earlier this year, the Ripple chief technology officer shared which cryptocurrencies make up his portfolio.

Back in January, Schwartz tweeted that Bitcoin and XRP constituted the largest part of his crypto portfolio.

The main catalyst for Bitcoin, Ethereum and other cryptocurrencies hitting new all-time highs over the past several days has been the Coinbase crypto giant going public via direct listing on the Nasdaq.

The much-anticipated event took place on April 14 with the Coinbase valuation reaching $100 billion and trading kicking off at $381 per share and then surging to $400 per share.