Peek into Vitalik Buterin’s Ethereum wallet and you’re going to see a Shiba Inu coin worth billions of dollars.

But it’s not like Buterin is sniffing out digital pets in the form of ERC20 tokens. Projects like “Shiba Inu,” “Akita Inu,” “Huskytoken,” and others gifted their own supply to the Ethereum co-founder to arguably popularize their tokens amidst the ongoing Dogecoin frenzy (DOGE has found its place on a literal moon mission.

Buterin’s ETH holdings crossed the $1 billion mark last week after the asset crossed the $3,000 price level. It is now worth over $1.3 billion, making the 27-year-old one of the world’s youngest billionaires.

But some other tokens in his wallet are valued eightfold of that. As the below image shows, Shiba Inu (SHIB), a Dogecoin-like meme coin that has pumped 43,860.0% in the past 30 days, is now worth a staggering $8.4 billion. 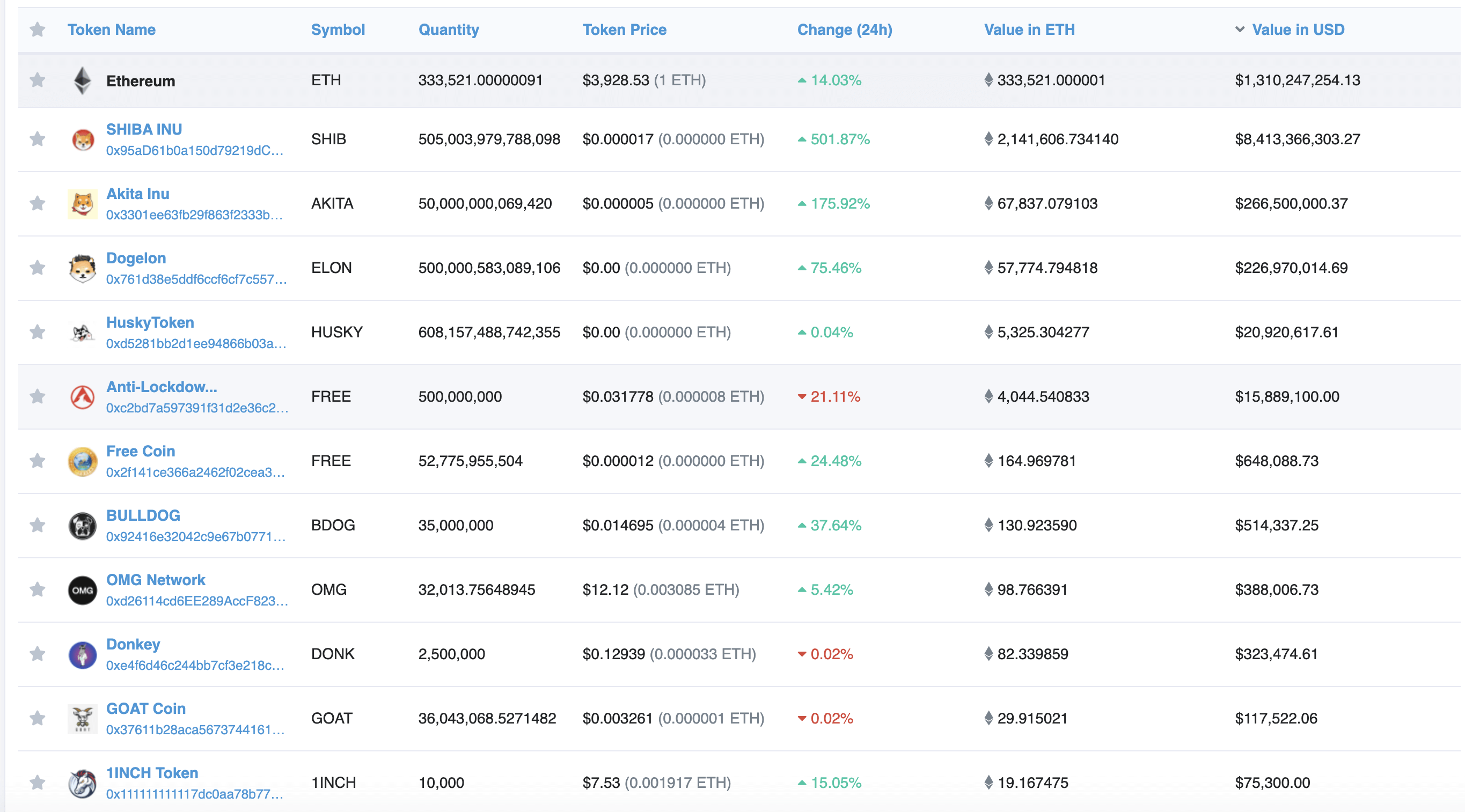 On its website, SHIB is positioned as a “decentralized meme token” that locked 50% of the total supply to Uniswap and “threw away the (private) keys.” The project is launching its own decentralized exchange called ‘Shibaswap’ after audits are completed and seem to even have an art lineup for the future.


Shiba additionally boasts of taking enough care to ensure the team doesn’t dump on holders. “The remaining 50% was burned to Vitalik Buterin and we were the first project following this path, so everyone has to buy on the open market, ensuring a fair and complete distribution where devs don’t own team tokens they can dump on the community,” the site explains.

And people seem to have rewarded that pitch. SHIB has gone from near-non existence in the past week to be worth over $14 billion today.

Why are other petcoins pumping?

Other petcoins are seemingly following the same pitch and token strategy. Akita Inu (AKITA), Dogelon (ELON), HuskyToken (HUSKY), and Bulldog (BDOG) are cumulatively worth hundreds of millions of dollars and sent 50% of their own supply to Buterin’s ETH wallet.

There are then other meme coins like Anti-Lockdown (FREE), Freecoin (again, FREE), Donkey (DONK), and GOAT Coin (GOAT) which are cumulatively worth tens of millions of dollars as well.

To be perfectly clear, Vitalik can rug you. Will he do it? Certainly not. There’s no incentive for him to tarnish his reputation for 200 ETH.

The petcoins are likely pumping on the back of Dogecoin’s meteoric rise in the past months, which has itself garnered massive publicity from the likes of Tesla CEO Elon Musk, webcam star Mia Khalifa, and business magnate Mark Cuban.

Some like Cuban even started accepting DOGE as a payment method for merch sales of his basketball team Dallas Mavericks last month, with fans buying over $122,000 worth of merchandise via the memecoin.

The push saw Dogecoin jump by hundreds of percent this year alone, and the success gave rise to a host of doge projects. The crowd, in turn, blinded by unit bias, has pumped coins like SHIB to billions of dollars in market cap, buoyed partly by the efforts of TikTok and Instagram stars who shill the coins to their millions of fans.